The American Heroes Challenge was started as an event to raise money for the Las Vegas Veterans Memorial which will be located in Huntridge Circle Park.  As President of American Shooters and member of the Las Vegas City Council as well as a Veteran himself, Michael Millett has been pushing this project through.

“Many area veterans and their families have looked for a place to honor America’s heroes. With the approval of the City of Las Vegas, I look forward to the memorial becoming a part of our community in the near future.” ~Michael Millett

Although many companies participated in the event, the two primary sponsors were local veteran owned businesses American Shooters and Progressive F.O.R.C.E. Concepts.

A large tent was used to house the donation center along with displays from product manufacturers and vendors.  One of the highlights, from the spectator’s side, was the shooting range that was available to the public.  It’s not every day that “Joe Average” is able to shoot a .50 caliber sniper rifle.  I heard a few people discussing the $20.00 per shot “donation” but overall everybody agreed that it was a lot less expensive than buying your own rifle and benefiting the cause was well worth the price of admission.  Other firearms were available for public use but this one seemed to be the crowd favorite and it certainly got everybody’s attention with each pull of the trigger.

Bill Marshall is engulfed in a cloud of smoke as he feels the recoil of the .50 cal. Beretta rifle.

The memorial is being funded without the assistance of taxpayer dollars.  As such, donations are gladly accepted and much appreciated.  Best of all it’s been made incredibly easy with use of any major credit card and this simple online form.

Hosted by the Desert Sportsman”s Rifle and Pistol Club,  this two day tactical competition gave S.W.A.T. teams, from different parts of the nation, the chance to battle it out over multiple stages that are designed to test everything from physical strength to shooting ability and teamwork.  I was fortunate enough to be able to follow the King County Sherriff’s TAC-30 team, from Washington State, through both the Practical Shooting Skills Event and the Rapid Deployment/Hostage Rescue Mission.  The King County team took the overall first place win in this year’s event.

The Rapid Deployment/Hostage Rescue Mission took place in a structure which had been built to resemble a building.  Each team arrived in a van and the exercise started as soon as the van pulled to a stop.  Members of the teams piled out and ran for the front door of the building where they used battering rams to penetrate the heavy steel doors then tossed in flash bangs to disorientate the opposition.  Once inside they made their way through each room taking out bad guy targets and rescuing hostages. From my vantage point on the catwalk above, I was able to capture all the action from start to finish.

Team members are instructed throughout the excercize.

The Practical Shooting Skills Event involved live fire of both carbines and pistols and included transition to and from each weapon as well as both right and left handed shooting.  Team members engaged targets from different distances, some done standing still and others required the shots to be taken while on the move.

There was MUCH more to this event than I was able to capture but I hope that you enjoy the photos we do have.  Hopefully next year our coverage of this event will be more complete. 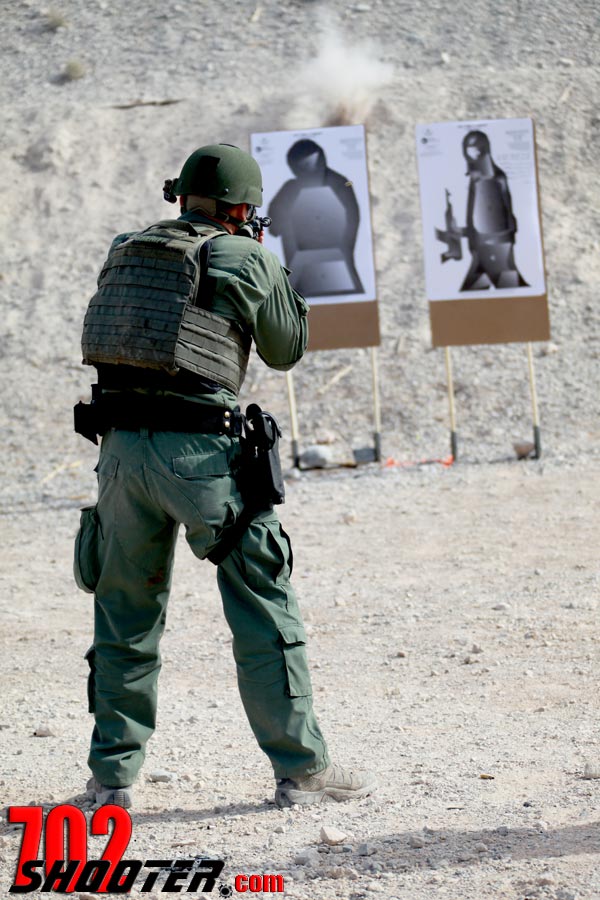 A plume of dust raises behind a target after receiving carbine fire.